0 Veterans engaged for research & testing 0 Cities engaged across the country Project Background The US Department of Veterans Affairs (VA) offers a wide range of benefits for American veterans, but veterans are not always clear on what benefits they’re entitled to — a problem exacerbated by the time that may elapse between military […] 0 Interviews with justice-involved people 0 Interviews with community-based practitioners Project Background Louisville’s jail facilities had a capacity of nearly 1,800 people, but in 2015 they were over capacity by nearly 25% — a surge driven by arrests related to the opioid epidemic. Because of crowding, people arrested for nonviolent offenses were being housed with […]

0 Hours of user interviews 0 Rounds of design research conducted 0 Towns engaged for user research Project Background In 2010, the firms of PPL founders David Gibson, Chelsea Mauldin, and the late Sylvia Harris participated in an evaluation of Medicare communications. Their preliminary goal was to identify ways to improve Medicare beneficiaries’ engagement and […] Project Background Family Pathways to Care is a multi-year collaboration between the Public Policy Lab (PPL) and the NYC Administration for Children’s Services (ACS) Division of Prevention Services and the NYC Department of Health and Mental Hygiene (DOHMH) Bureau of Children, Youth, and Families, funded by a Collaborative Innovations Initiative grant awarded to ACS by […] 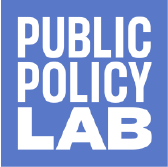 We'd love to hear more. Send us a note and we'll be in touch.

Applications for the Fall/Winter Operations Fellowship and Design Fellowship have closed. Selected applicants will be contacted for a Zoom interview, to be held in mid-September, with offers expected to be made in October.

To stay in the know about future opportunities, please subscribe to our newsletter and follow us on social media (below).

Enter your email below to subscribe to our occasional newsletter.

The Public Policy Lab is a tax-exempt
501(c)(3) nonprofit organization.

Donate now to support our work; your
gift is tax-deductible as allowed by law.